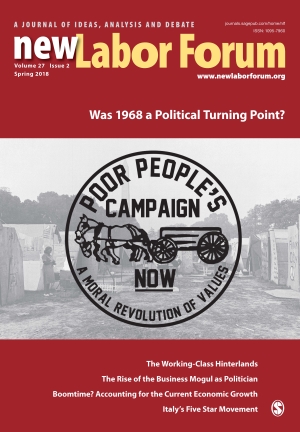 The May 2018 issue of New Labor Forum is out. On the 50th anniversary of Dr. Martin Luther King, Jr.’s assassination, the journal features an article by Reuel Schiller measuring the magnitude of King’s loss in relation to the dissolution of the Poor People’s Movement he helped birth and the subsequent suspension in large-scale, multiracial organizing for economic justice.

Today may mark the beginning of the end of that long hiatus. As we send this newsletter off, The Poor People’s Campaign: A National Call for Moral Revival, launches a nation-wide event including nonviolent moral direct actions in over 30 state capitals, and a series of similar actions that will take place over the next 40 days. This follows two years of meetings in communities throughout the country which led to a report, entitled “The Souls of Poor Folk: Auditing America 50 Years After the Poor People’s Campaign Challenged Racism, Poverty, the War Economy/Militarism and Our National Morality.” Those conversations in turn resulted in a Declaration of Fundamental Rights and Poor People’s Moral Agenda. We include here a profile of the campaign’s co-founder, the Reverend William Barber, by Jelani Cobb in the current issue of The New Yorker, as well as a report on the campaign that ran over NPR earlier this morning.

As the Poor People’s Campaign seeks to end the poverty that plagues approximately 40 million Americans, we would all do well to reassess the War on Poverty, declared by President Lyndon Johnson four years before Martin Luther King, Jr.’s assassination.  In a 2014 article for New Labor Forum, Frances Fox Piven argues that, contrary to accepted wisdom, that the War on Poverty was a largely victorious engagement which mobilized pressure from below reinforced by the Democratic Party’s need to shore up its dwindling political reach in the North, producing a measurable reduction in poverty over the next twenty years. Yet now, Piven notes, not only is poverty back, but the faces of poverty have changed. The most telling difference is that, when Michael Harrington wrote The Other America and Lyndon Johnson took up arms, poverty was thought to afflict people cut off from employment in the mainstream economy, like older people no longer working or those living in Appalachia or the country’s urban ghettos.  Today poverty has become, as it once was back in the 19th century, a function of exploitation at work (not mostly exclusion from work) so that somewhere between 30 and 40 million people make up what we call “the working poor.” And it is this changed nature of poverty that the new Poor People’s Campaign explicitly intends to address. This post originally appeared at New Economy Week 2015: From Austerity to Prosperity.

Uber recently purchased one of the largest office spaces in downtown Oakland, California, with plans to move3,000 of its workers there by 2017. For a city facing a housing crisis and rapid displacement of Black families and low-income communities, many fear this act will accelerate gentrification pressures. It has also led to some cautious optimism for an opportunity to make Oakland a leader in what Mayor Libby Schaaf has called techquity: “fostering our local technology sector’s growth so it leads to shared prosperity.”

Tech companies can play a role in advancing an equitable economy, but they will first have to confront a deeply inequitable status quo. The San Francisco Bay Area has one of the highest levels of inequality of any region in the country, and it is growing at an alarming pace. Unequal access to business and job opportunities have deepened racial economic gaps – Black and Latino workers earn a median wage that is $10 an hour less than White workers in the Bay Area, and these racial inequities exist across all education levels. The tech-driven “innovation economy” can reverse these trends. But to understand how, it’s important to examine how the innovation economy works. END_OF_DOCUMENT_TOKEN_TO_BE_REPLACED America is no longer a representative democracy—a fact underscored by decades of grotesque and steadily worsening economic inequality and an election process that depends more on wealthy donors than on an informed electorate.

Case in point: the middle class has been shrinking for decades and is now in the process of disappearing altogether. Since 1979, 90 percent of the economically-challenged have lost money each year, while the wealthiest 10 percent have posted huge gains, according to Forbes (and any reputable economist). The American dream is all but dead for the vast majority of us, with 1% of the population controlling 43% of the nation’s wealth.

Self-determination in the workplace could be one of the keys we need to empower and grow the working class in our nation and re-igniting the American dream. And worker-owned cooperatives could be the match that lights that flame. END_OF_DOCUMENT_TOKEN_TO_BE_REPLACED