Launched in early 2015, Murphy’s International Program for Labor, Climate & Environment aspires to be a hub for education, research, policy development and alliance-building for US and international unions working on energy, climate change, and ecological and social sustainability. <<read more>> The concept of “Just Transition” has become increasingly in vogue in recent years in international political circles. While commonly ascribed to be “transformative” in potential, like any fashionable term it runs the risk of being emptied of content and coopted by arbiters of the status quo. So what really is Just Transition, and why is it potentially so transformative? This is the question the authors set out to answer in this eleventh working paper published under the auspices of our Trade Unions for Energy Democracy (TUED) project.

In one of its most thorough treatments to date, Sean Sweeney and John Treat, both of the Murphy Institute, not only define the concept of Just Transition but take us through its history and the various polemics that surround it. Starting with its roots in the U.S. labor movement, the authors trace the development of the concept, from being one focused almost exclusively on workers impacted by environmental policies, to becoming much broader in its call for socioecological transformation at the point of not only consumption but also production. END_OF_DOCUMENT_TOKEN_TO_BE_REPLACED In the previous TUED Working Paper #9, Energy Transition: Are We Winning?, we raised in passing the serious investment deficit in renewable energy, in the context of a broader examination of overall trends with the global energy system and greenhouse gas emissions. In this paper, we have taken on the investment question directly and in detail. END_OF_DOCUMENT_TOKEN_TO_BE_REPLACED Compiled by Michael O’Neil for TUED

The Labour Party under Jeremy Corbyn have released their 2017 manifesto for the June 8th General Election, entitled “For the Many, Not the Few.” The manifesto outlines policies of interest those dedicated to the movements for energy democracy and a just transition away from fossil fuels.

“CREATING AN ECONOMY THAT WORKS FOR ALL”In the section Upgrading Our Economy: Labour’s Industrial Strategy, it states that a Labour Government would ensure that “60 per cent of the UK’s energy comes from zero-carbon or renewable sources by 2030.”

This statement was delivered by TUED unions to the Labour Party energy shadow minister Alan Whitehead in the days following the announcement of the general election:

With the announcement of a general election for 8th June, UK trade unions participating in Trade Unions for Energy Democracy  are calling on the Labour Party to include a manifesto commitment to extend public ownership and democratic control to UK energy.

UK TUED unions welcome initial Labour Party proposals for energy transition and a vision for energy democracy based on new forms of public and community ownership, putting climate change and social justice at the heart of industrial strategy. This now needs to form part of a clear manifesto commitment to reclaim energy back to the public sphere. Labour should set out an ambition for new affordable, low carbon energy system that reduces greenhouse gas emissions and pollution, always emphasising the massive opportunities to create secure, skilled unionised jobs for communities across the UK. 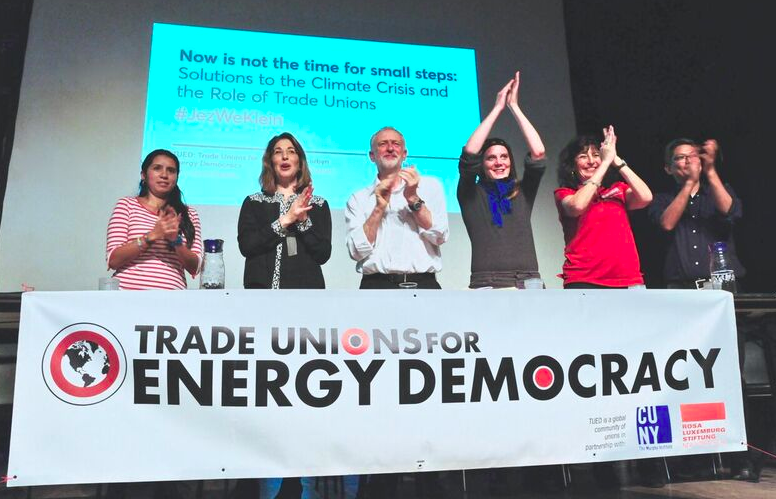 In the short time since Donald Trump was inaugurated, a lot has happened — with the threat of more to come. Among the many Executive Orders signed last week, Trump acted to reverse Obama’s halt on the Keystone and Dakota Pipelines. While EO’s won’t get the pipelines built on their own, it’s a clear signal that on climate policy, things are quickly heading south.

New Labor Forum Columnist Sean Sweeney has written a post about the evolving relationship between some of the Building Trades, the new Administration, and the fossil fuel industry.

Naomi Klein rounds out the topic by pointing out that much of the policy changes we are likely to see under Trump will be driven by the logic of disaster capitalism – that changes the 1% has long desired and planned for, will be rolled out in response to ‘disasters’. Understanding this dynamic is important, as it will apply not only to energy policy, but to national security, labor rights, and more.

Given the tensions in the labor movement around climate policy, we expect (and hope for) vigorous debate — please be sure to visit our Facebook page and/or the blog to participate.