The School of Professional Studies of the City University of New York
(CUNY SPS) has launched sixteen degrees: ten bachelor’s degrees open
to students with 24 or more college credits who wish to complete
their undergraduate studies, and six master’s degrees, with more
programs currently in development. CUNY SPS leads the University in
developing and operating online degree programs, and trains faculty
throughout CUNY in online instruction. CUNY SPS is also the home of
the Joseph S. Murphy Institute for Worker Education and Labor
Studies, which offers higher education programs for working adults
and union members, and serves as a nationally-recognized center for
scholarship and resources for labor, academic, and community leaders
seeking a deeper understanding of labor and urban issues.

CUNY SPS seeks a detail-oriented Issue Resolution Team Member to
support a new partnership with the NYC Mayor’s Office of Housing
Recovery Operations (HRO) and the Build It Back program. Build It
Back is dedicated to helping New Yorkers living in communities
affected by Hurricane Sandy to rebuild their homes.

The American Federation of State, County & Municipal Employees (AFSCME) is pleased to partner with Harvard University’s Labor and Worklife Program to sponsor the Union Scholars Program. AFSCME is one of the nation’s largest labor unions, representing public service employees and retirees across the country. Harvard’s Labor and Worklife Program, located in the Harvard Law School, is the university’s center for research, teaching and creative problem-solving related to the world of work.

Students will take part in a hands-on organizing experience with AFSCME members, and will enjoy an opportunity to travel and receive valuable, resume-building experience – all while getting paid.

To qualify for the scholarship, you must:

Selected AFSCME Union Scholars will receive a three-day orientation to prepare for their internship. They will also receive a 10-week field placement in the summer of 2020, when the student will participate in a union organizing campaign in one of several locations across the United States. Students who enter the program as sophomores are eligible to return for a second year. Returning students may receive a 10-week summer placement at AFSCME headquarters in Washington, D.C. All chosen candidates will receive the following: Registration for this course is open now through January 20, 2020.

The program is sponsored and hosted by the new CUNY School of Labor and Urban Studies, which grew out of the Murphy Institute, and its over 30 years of educating tens of thousands of New Yorkers about the challenges and possibilities confronting organized labor and working-class communities.

Each of the 8 Saturday morning sessions will feature veteran practitioners and CUNY faculty with years of experience and expertise in civic leadership, electoral politics, the history of mass movements, and policymaking at the local, state and national levels of government.

Participants completing at least 7 of the 8 Saturday morning sessions will receive a certificate. All participants will join the growing network of CELD alumni, and be invited to future civic leadership events and gatherings.

Registration info and tentative class descriptions are below. Questions? Email us at events@slu.cuny.edu. END_OF_DOCUMENT_TOKEN_TO_BE_REPLACED

The Bernhardt Prize is an award of $500 given to an article that furthers the understanding of the history of working people.  Articles focused on historical events AND articles about current issues (work, housing, organizing, health, education) that include historical context are both welcome.  The work should be published — in print or online — between August 1, 2018 and August 25, 2019.  The deadline for the 2018-2019 contest is August 25, 2019.

The prize will be given to insightful work that contributes to the understanding of labor history; shows creativity; demonstrates excellence in writing; and adheres to the highest journalistic standards of accuracy.   Only one entry per person; publications and subject matter should target the United States and Canada; neither books nor plays are eligible.

TO ENTER send an e-mail before midnight on Sunday August 25, 2019 to info@laborarts.org with the following information: author name; title of article; name of publication; date and place of publication; url link for article (if available); if no link is available attach a pdf of the article and of the front page of the publication.

We are guided by the vision of the late Debra E. Bernhardt, who worked in so many different realms to share the hidden histories of working people. As head of the Wagner Labor Archives she reached out to an astonishing number of people and organizations, to document undocumented stories and unrecognized contributions, and to make links between past and present.  The LaborArts project is dedicated to Bernhardt, and the online exhibit “Making History Personal” explores her work.

Toni GIlpin received the 2017-18 Award for “A Louisville Union Built Its Strength as Blacks, Whites Took on International Harvester,” in Louisville Weekly,August 30, 2017.  She received the prize at the Bernhardt Labor Journalism Forum on October 16, 2018 – “2018 – The Year of the Teachers Strikes” with investigative journalists Micah Uetricht (Jacobin, In These Times) and Tom Robbins (CUNY).

Garret Keizer was the 2016-17 Award winner for his article “Labor’s Schoolhouse – Lessons from the Paterson SIlk Strike of 1913,” in Harper’s Magazine, July 2017.   The prize was awarded at the Third Annual Bernhardt Labor Journalism Forum on Thursday October 12, 2017 at Tamiment Library, with investigative journalists and labor activists Ginger Adams Otis(NY Daily News);  Michelle Chen (The Nation); and Ed Ott (CUNY) participating.

The 2015-2016 winner was Chloe Kent, for her article “The Women of New York’s Bravest” in Enchantress magazine, May 2016.  The award was announced at a forum at NYU’s Tamiment Library on October 13, 2016.  Columnist and broadcast journalist Juan Gonzalez joined historian Kimberly Phillips-Fein for a discussion about using history to improve reporting on current labor issues, with Tom Robbins returning as moderator; Jon Bloom spoke about Bernhardt.

The 2014-2015 prize was awarded on October 15, 2015 to David Kameras and Emily Harris for their May, 2014 article in the United Mine Workers Journal:  “From Tragedy to Triumph – 100 Years Later, Workers Benefit from Ludlow’s Legacy.”  The presentation was held at NYU’s Tamiment Library, following a program moderated by Tom Robbins, Investigative Journalist in Residence, Graduate School of Journalism, CUNY; with panelists Esther Kaplan, Editor, The Investigative Fund at The Nation Institute; and Richard Steier, Editor, The Chief-Leader; Alex Bloom spoke about Bernhardt. 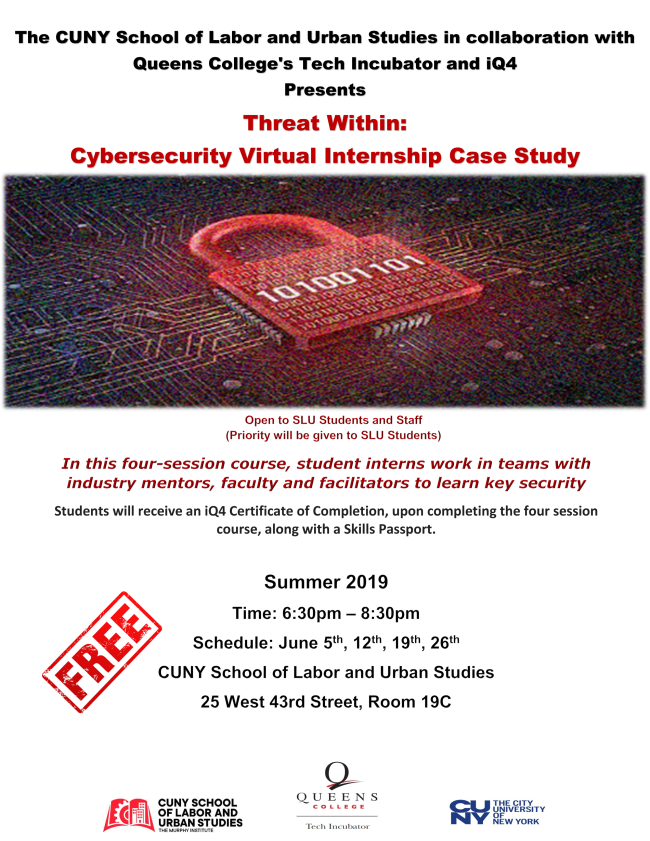 SLU’s Worker Education in collaboration with the Tech Incubator at Queens College and iQ4 is offering a free four-session course “Threat Within: Cybersecurity Virtual Internship Case Study​” in summer 2019.

This cybersecurity applied learning course is a non credit course, free of charge, to the SLU students and staff. The course is not highly technical and is designed to introduce students regardless of their major to cybersecurity, as an academic discipline and a career alternative.

This is an opportunity for students to develop/enhance their soft skills using cybersecurity as the use case. Students will be working in teams and presenting their weekly assignments to iQ4 volunteer, industry mentors.

Students will receive an iQ4 Certificate of Completion, upon completing the four session course, along with a Skills Passport, and a online next gen resume from iQ4. 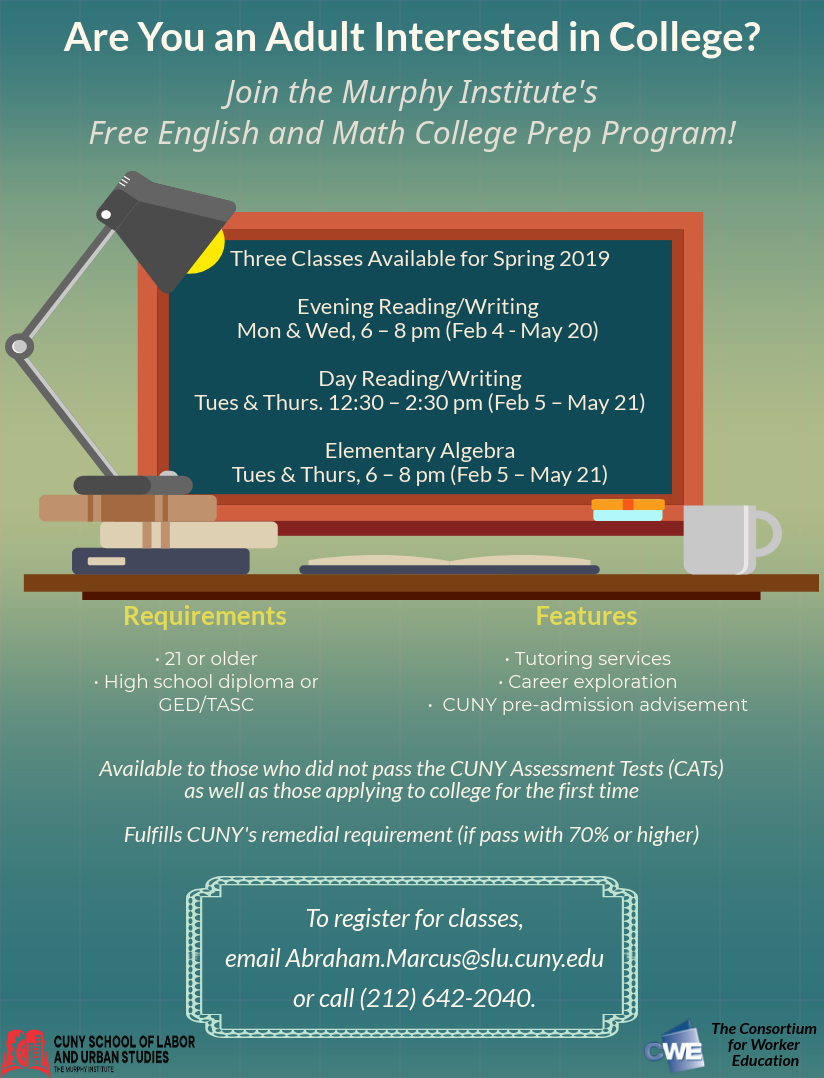 The Association for Neighborhood and Housing Development (ANHD) is currently recruiting for the 2019-2020 Morgan Stanley Community Development Graduate Fellowship. This program will provide an opportunity for nine Master’s Degree students to take a significant role in a high-impact, community-based project targeting a low- and moderate-income neighborhood. Fellows will receive a $20,000 stipend to serve in a part-time (20 hours a week), ten month (September 1st – June 30th) internship in a neighborhood-based community development corporation (the host organization). Projects may be in the fields of affordable housing, economic development, or community planning. A key objective of the program is to help train the next generation of community development leaders, so in addition to hands-on community development work, Fellows will have the opportunity to meet with leaders in New York City’s government, planning, and community development fields. If academic credit is available, the host organization will work with the Fellow and his or her educational institution towards securing this credit.

The nine host organizations have each designed a distinct, compelling community development project and the role for the Fellow within this project. Projects were chosen based on their impact, achievability and suitability, the learning experiences provided to the Fellows, evidence of the importance of the project to the host organization, and the strength of the host organization. Each host organization will play a significant role in choosing its Fellow. Fellows will be required to attend periodic networking and training events. In addition, Fellows will have access to all of ANHD’s regularly scheduled educational courses and conferences.