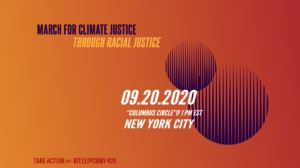 On Sunday, September 20th, the March For Climate Justice NYC will kick-off Climate Week in New York City. The aim of this march is to make direct connections between the climate and racial justice movements by centering Black, Brown, and Indigenous communities. More information on how to get involved here.
***
Covid19 Reminder: All must wear masks. Bring hand sanitizer, bring signs. Try to maintain social distance. Make the healthiest choices not just for you, but for everyone. The ongoing killings of people of color too numerous to name, the killing of Police Officers in Baton Rouge and Dallas, and the occupations of the Fraternal Order of Police by BYP100 and the Movement for Black Lives Matter have escalated calls and action for systematic change. It is urgent that the Labor Movement and our communities confront the complex and interlocking dynamics of law enforcement, unionism, and racial justice.

The Murphy Institute aims to bring together academics, activists, students, and practitioners to pose crucial questions concerning the criminal justice system, and the labor movements’ place and responsibility within it. We will host a series of roundtables and discussions, opening with this October 21st forum and culminating with a two-day conference April 28th and 29th. These events are designed to wrestle with the fundamental questions of unionism and solidarity, race and class, with the ultimate goal of finding a real path toward more equitable criminal justice.

The forum is free but registration is required. University of Pennsylvania, member of the New Labor Forum editorial board, and writer of Caught: The Prison State and the Lockdown of American Politics, argues, “Alleviating the poverty and income inequality that are at the root of extraordinarily high levels of violent crime in certain communities will take some time. In the meantime, no compelling public safety concern justifies keeping so many people from these communities locked up or otherwise ensnared in the carceral state.” END_OF_DOCUMENT_TOKEN_TO_BE_REPLACED At this morning’s breakfast forum: “Is There a Future for Low-Income Housing in New York City?”, panelists and audience members had a wide-ranging and animated discussion about constraints and opportunities for achieving the goals of Housing New York: A Five-Borough, Ten-Year Plan. HPD’s Brent Meltzer, a housing preservation specialist and Assistant Commissioner for Community Partnerships, presented the Mayor’s Plan and fielded questions on density, preserving affordability, and the challenges of gentrification. Ismene Speliotis, Carlton Brown, and Lavon Chambers contributed perspectives from advocacy, affordable housing development, and labor. Some of the many take-aways:

See two of the presentations from the forum here:

Organizing 2.0 brings together hundreds of leaders, organizers, fundraisers, techies and activists to share our collective wisdom, skills, and talents. There will be workshops, trainings, discussions, consulting and networking opportunities, visionary speakers, and a provocative debate around strategy and practices.

Over two days here at the Murphy Institute, we will bring together hundreds of people to learn from each other, share stories and strategies and build our skills, organizations and movements. Featured tracks focusing on online to offline organizing, digital strategy, member engagement and much more.
Register here: http://www.conference.organizing20.org/
Scholarships are available.
For more information, email clenchner[at]organizing20[dot]org

NYC Celebrates Global Labor Solidarity
MAY 9TH TO MAY 19TH, 2014

The Workers Unite! Film Festival aims to showcase student and professional films from the United States and around the world which publicize and highlight the struggles, successes and daily lives of all workers in their efforts to unite and organize for better living conditions and social justice.

This year we honor the Joseph Murphy Institute for Workers Education and Labor Studies, based at The City University of NY.