Spotlight on Students is a series in which we showcase the different pathways that students are taking through SLU. This is the first post in the series, featuring William Barron, a student in our Worker Education program at Queens College. 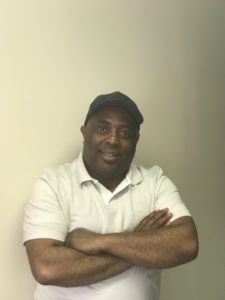 William Barron exudes passion, even over the phone. During our recent interview, Barron, a public school paraprofessional earning his bachelor’s degree at Queens College, would regularly become so enthusiastic that his sentences blurred together in one fast outburst of emotion. Yet his answers never felt off-topic or unfocused. On the contrary, his magnetic personality and fierce determination left me inspired and wanting to talk further, to see what life lessons I might be able to glean.

Barron’s CUNY story began at Kingsborough Community College where he earned an associate degree before planning to take a break from school in order to work. He decided last-minute to stop by a college fair and serendipitously met Francine Sanchez of The Murphy Institute for Worker Education at Queens College. Her advice was so compelling that he decided to keep going with his education.

“Queens was overwhelming at first, a totally different experience from community college,” Barron said of the transition. “Many times I’d go over to the Murphy Institute and ask a new question. You wouldn’t even believe how helpful they were.”

Barron remembered one particular moment where he felt so confused and upset about the transfer process that he was ready to drop out. “I went to Francine while she was in the middle of a meeting and she stood up like, ‘I see your face, what’s wrong, let’s talk.’ I saw all of their concern, their human passion, how they’re about way more than doing business or finishing paperwork but actually about helping.”

In addition to the specific guidance he received throughout his first semester, Barron also appreciates the ongoing advice the Murphy Institute’s staff has continued to provide, particularly that of Director Joanne Mason. “Joanne is always saying, ‘You gotta work on time management,’ and I hadn’t even realized it,” he told me. “But it’s so true!” he added, laughing.

Even with the support, getting to this point hasn’t been easy. Like many adult learners, Barron works full-time in addition to pursuing his studies part-time. After six years at Queens, he has completed all of his major requirements and is now focusing on those remaining for his minor.

“I’m not gonna lie, it is difficult. But like my Grandma says, when you’re busy, you’re staying out of trouble.”

According to the federal government’s recent research, 27.6 million college students in 2018, or 2 out of 5, were adult learners aged 25 or older. While there has been an increase in nationwide services geared toward supporting this population, these services can often feel insufficient to those balancing work, school, and other responsibilities such as children, aging parents, home ownership, and more. Barron saw the day-to-day struggle many of his classmates were experiencing and decided it was time to take matters into his own hands. Thus, The Evening and Weekend Student Network, the only evening club on campus, was born.

“I listen to students’ voices and I don’t take no for an answer,” Barron, the current club president, said about his efforts. “If I feel strongly and passionately about something, then I’ll find a way and keep going on about it.”

In addition to advocating this population to administrators of Queens College, the club also provides campus tours, offers free childcare assistance during finals season, aids students in creating study groups, invites professors and motivational speakers to Saturday events, organizes themed meet-and-greets on weekday evenings with industry experts from companies like Microsoft, and hosts a final “End-of-the-Year Splash” to places such as Six Flags. Club officers even frequently call students who have stopped or dropped out to remind them that they always have a support network when they decide to return to Queens College.

“We empower students to follow their own instincts and timelines,” Barron says with pride. “But now, I can’t graduate until I find my successor!”

Want to join The Evening and Weekend Student Network at Queens College, or even take on a leadership role? Contact William Barron at 917-757-3884 or william.barron27@qmail.cuny.edu.