Ten-years after the Great Recession of 2008, employment has rebounded in New York City and in New York state, where the unemployment rate was 4.0% in July 2019. However, this job growth has been disproportionately concentrated in low-wage industries, especially in the private sector. This year’s report, State of the Unions 2019, A Profile of Organized Labor in New York City, New York State, and the United States, reveals that in recent decades, losses in union membership have been disproportionately concentrated in the private sector, a trend that accelerated after the Great Recession. By contrast, in the public sector, union density has been relatively stable in the City, while declining slightly over the past few years in the U.S. and New York State.

The report highlights rising employment levels over the decade: 10 percent in the state, 13 percent in the New York City Metropolitan Area, and 19 percent in the City. But while this reflects the strength of New York’s economy, the quality of the new jobs is a major disappointment.  Adjusting for inflation, average annual earnings increased only 2 percent for workers in New York City from 2008 to 2018, 3 percent in the metropolitan area and 7 percent statewide. Earnings have been particularly weak in the private sector, where they declined by 1 percent between 2008 and 2018 in the City. By contrast, in the public sector, earnings rose 20 percent at the state level and 28 percent at the city level.

“What we see here is emblematic of a national trend. The economy continues to grow, unemployment is at an all-time low, yet workers’ wages lag behind, even as health care costs continue to skyrocket and inequality is rising,” said report co-author and SLU Professor Ruth Milkman. “On average, more union than non-union workers earn a living wage, so it is no surprise that declining private-sector union density has contributed to earnings erosion.”

The report highlights another disappointing dimension of the earnings picture, namely job losses in industries with relatively high wages (such as manufacturing, finance, and wholesale trade) and job growth in industries where average annual earnings are below the living wage (such as health care and social assistance, retail and food services).  Nonunion workers are far more likely to earn less than a living wage, as the Table below shows. 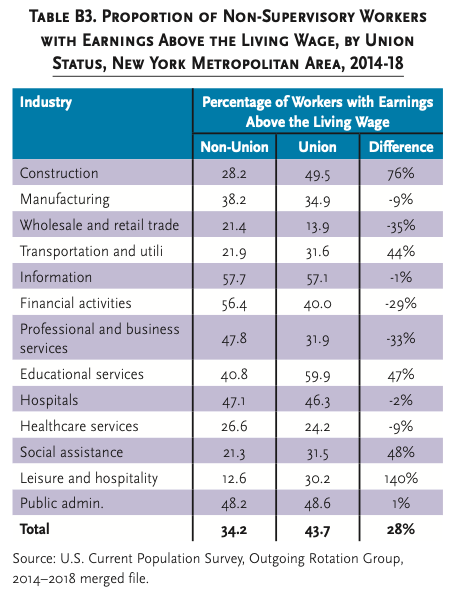 The report also flags other trends involving unions and workers in New York and nationally. Unionization rates are much higher for older workers than they are for younger workers. In New York City, they are highest for workers aged 55 years or more, somewhat lower for those aged 25-54, and lowest for those aged 16-24. This pattern suggests the need for more union organizing among newer and younger labor market entrants.

“Despite an overall decline in union density, New York City and New York State remain among the best places to work because union membership is relatively high,” said co-author Stephanie Luce, Chair and Professor of Labor Studies at SLU. “But New York cannot rest on its laurels. The labor movement must actively recruit new members into its ranks to maintain a strong economy and fair wages for all.”

The report also includes an in-depth look at the geographic, demographic, and occupational makeup of unions in New York City, New York State, and the nation.

Read the report in full here.