Cassy is a concrete carpenter with Local 290, and how she got there was quite a journey. “I’ve worked all over, in six states and 24 countries.” she said. “I worked at a coffee farm in Ecuador. I took seasonal jobs where you live in camps, and afterward I would just travel until I ran out of money. I did a lot of work in state and national parks, doing things like putting up and taking down barriers. That’s where I learned to use hand tools. I worked on hiking and ATV trails, I did some natural resource management—planting bushes and such—as well as doing environmental presentations for kids.”

What is she doing now? “When I moved back to New York I got into the union, with the help of a friend,” she said. “I’ve been with Local 290 for almost five years. It’s great because the carpenters’ union covers both the U.S. and Canada, so I can work in many different places and still pay into the same pension and benefits system. Most recently, especially since COVID, I’ve been working on-site at transportation venues like the LIRR.”

And co-founding an organization for women the construction trades:  Tradeswomen Building Bridges. “TBB came about as a result of a Fulbright project by Susan Moir—a comparative study of women working in the construction industry in India and the U.S.—that led to delegations of tradeswomen traveling to India in 2017 and 2019.  I was part of the 2019 delegation,” Cassy said. “Afterwards some tradeswoman delegates got together to try to create a global network of rank and file union women in construction. It’s an ambitious undertaking.  Essentially, we’re trying to make TBB the North American network for tradeswomen in construction. We’ve partnered with other organizations at the international level—Europe, India, Asia, Africa, Australia, New Zealand—organizing campaigns, doing virtual training exchanges. Right now we’re working on an exchange with England, where the number of women in construction is very low. That will involve tradeswomen from the U.S. (hopefully me!) going there to work and organize.” 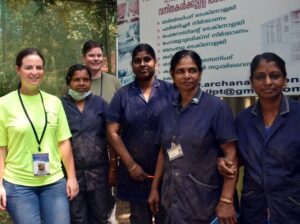 She added, “Except for India—where they’ve been training women in construction trades since the 80s, albeit in mostly menial jobs—women are still underrepresented in most places, including the U.S.  And here the union doesn’t solve all our workplace problems, because we’re in a male-dominated occupation and a male-led union. In NYS outside of the city, there are like 6,000 male journey people and only 64 women journey people.” How would she change that? Cassy shook her head. “I would like to be in my union’s leadership someday, but I know change comes from many different avenues. Often, union leaders are subject to the will of higher-ups, politicians, and contractors. I have a lot of freedom as a rank-and-filer. So right now, I’m trying to lead outside the traditional union avenues.”

And working on a Master’s degree in Labor Studies at SLU. “My union sent me to the UALE Summer School in 2019, and it really piqued my interest in going back to school. Just about everyone in my union’s leadership has only a high school education.  I want to raise that bar.  And I want to write about women in construction and get published.”

Asked how SLU is informing her work, Cassy said, “I loved studying collective bargaining and labor law with Ellen Dichner. They were really practical courses that I could tie into my union work. I read my own collective bargaining agreement and constitution, and learned where the power lies … and where I have power.”

Cassy’s power right now is focused on TBB. “SLU doesn’t just teach academics, they’re teaching me how to organize. They’re helping me learn how to build an organization from the ground up.  CUNY SLU partnered with TBB, and we hosted a panel on Zoom and had participants from all over the world. That’s my vision for TBB: to be in a building and a room surrounded by tradeswomen from all over the world.”

If anyone can build that, it’s Cassy Klewicki.