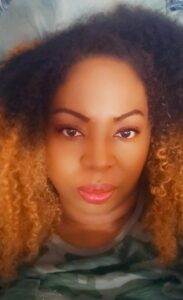 Yasmina Moore is doing it for herself. But she’ll be helping a lot of other people in the process.

A candidate for the Master’s degree in Urban Studies, Yasmina says she enrolled at SLU “because I wanted to learn something. I love my job and I’m successful at it but I felt like my learning process had plateaued.” She laughed and added, “I was all gung-ho at first but then I suddenly remembered that I’m over 40, I have a full-time job and I’m a mom. So I had second thoughts. But finally I decided to just go for it.”

Yasmina has worked at the NYC Department of Small Business Services for twenty years and is currently Director of Contracts and Partner Strategy. “I work with underserved communities and that’s what brought me to urban studies,” she said.  “My department does workforce, neighborhood and business development, we help entrepreneurs start and grow their businesses, and we place workers with those businesses. There more than 200,000 small businesses in the city—they are the largest tax revenue and employ the most people.”

How will what she has learned help her in her work? “I’m interested in policy work, especially policies that affect small black and brown businesses because they’re the ones most often hit with violations. My grandmother always said ‘don’t know’ can hurt the hell out of you. These small businesses are often charged with circumventing regulations that they don’t understand or even know about. I want to make it easier for them to interact with the city and get permits.”

She added, “I also want to do come policy work at my agency around cooperatives. I took Professor Lurie’s class—she is awesome—and I realized that the city has policies in place that make it difficult for businesses to transition into a worker cooperative program.  A lot of businesses don’t have transition or retention plans. So I’m doing some work with the worker co-op team at my agency to create a model for how employees could take over a business, and take those policy changes to City Hall.”

Yasmina paused and added, “I have learned a lot at SLU about policy administration. There are so many rules and regulations that keep people down. My Capstone is a policy memo around recidivism. I researched the NYS correctional facilities worker training programs, and found that it seems that they purposely do not offer enough hours of training for inmates to receive certification in jobs like plumbing.  If they were just provided with enough hours to meet the DOL requirements, they could exit with a license and that would make it easier to get a job outside.”

Asked to describe her experience at SLU, Yasmina didn’t hesitate. “I am a walking billboard for SLU. I did this degree in two years, and it wasn’t easy. But this is the kind of place you want to be because there is so much support. During my first semester, I really started to doubt myself. I thought, I’m not as swift as I used to be. I’m reading all these articles that I don’t really understand. But I was able to go to my professors—they are all fantastic, they aren’t just academics, they have real world experience—and they knew I was a returning student after 10 or 15 years, and they knew how to meet me where I was. And then, of course, there is my advisor, Samina. She has been super helpful and encouraging.” Yasmina laughed. “She’s talked me off a ledge more than once.”

“My classmates are extraordinary, too,” Yasmina said. “I have learned so much from them. The caliber of students that SLU attracts is amazing. A lot of them are already successful, they aren’t doing this for advancement, they’re doing it for themselves, to better themselves.”

What would she say to someone considering enrolling at SLU? “Just do it,” Yasmina said. “Don’t think too much about it, just go for it. Do it for yourself. It’s not easy, but it’s the kind of hard that you will appreciate.”