Adhikaar (a Nepalese word meaning “rights”) is a non-profit located in Queens that seeks to improve the lives of the Nepali-speaking community and make their voices heard, and to promote human rights and social justice for all. The organization has been influential in supporting legislation at the local, state, national and international levels to protect the rights of domestic workers, including the New York State Domestic Workers Bill of Rights and the International Domestic Workers’ Convention. “Historically, domestic workers have been excluded from unions,” Tsering said. “Even with the Fair Labor Standards Act, many are excluded.  So it will take legislation as well as organizing to change things.

The first New York bill was led by Domestic Workers United with coalition partners like Adhikaar, and passed in 2010. In 2018 Adhikaar began organizing in New Jersey and are working on introducing a Domestic Workers Bill of Rights there. I helped work on that at Adhikaar. Federally, with the advocacy of the National Domestic Workers Alliance, Kamala Harris and Pramila Jayapal introduced a bill providing protections for domestic workers. Adhikaar is involved in that, too.” 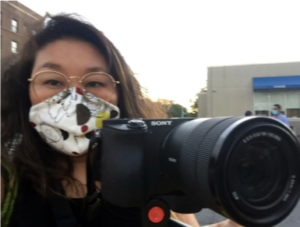 At Adhikaar, Tsering spent four and a half years organizing women from Nepal, India, Tibet and Bhutan, providing workers’ rights education, workforce development, interpretation, and helping workers find legal aid and other assistance.  When COVID hit, the organization moved into rapid response mode to provide direct assistance to thousands of members in New York and New Jersey.  Tsering oversaw direct assistance to more than 400 and other support to the 1,800 domestic worker members with regard to unemployment, sick leave, and COVID safety issues. And that’s where Tsering found the story that became the basis for her first film project.

“When the pandemic came, many domestic workers lost their jobs and had a lot of trouble making ends meet. One of them was a woman I was working with at Adhikaar. She lost her job in March. She had a terrible struggle. It took almost five months to get unemployment insurance benefits. Her daughter in Nepal got sick. Then, when things finally started to reopen and she started looking for another job, she found out that wages had gone down. Before the coronavirus she earned $700 a week; afterwards she was only offered $400, in spite of the danger.”

“So,” Tsering said, “I decided to tell her story in a film.”

But Tsering had never made a film. Where to start?  “I found Third World Newsreel, a very low-cost, accessible online workshop that covers both pre-production and post-production,” Tsering said. “I wrote the script in May and shared it with Stephanie Luce and my colleagues at Adhikaar. Then I shot the film in June and July and edited it myself, with some help from my colleagues.”  The result was a six-minute documentary entitled “A Salute to You.”

So how did she find herself at SLU? “Through a friend, Sol Aramendi, who is a graduate. I met Sol through the Cornell ILR workshop and we also worked on a photo project together with Adhikaar’s domestic worker members and labor trafficking survivors.  After I got my Bachelor’s from Hunter, I knew I wanted to go on and get a Master’s degree, and since I was already involved in organizing, SLU’s labor studies program seemed like the right fit.  Then I got a Diversity Scholarship, and that has allowed me to really focus on school.”

What does the future hold for Tsering? “I’m doing my Capstone on transnational organizing strategies to help domestic workers who are being labor trafficked. Unfortunately, most workers come to Adhikaar after they’ve been exploited. So how do we prepare workers coming to the U.S. so that they don’t fall into the pit of exploitation? Eventually I want to go back to Nepal and do transnational organizing. I’m looking at how to build relationships with unions in Nepal and create strategies to work with unions in America to protect these workers.”

And what about film-making? “I’m not going to distribute this film. It’s primarily meant to be archival footage about domestic workers’ experiences during the pandemic. But I plan to use what I learned making it to highlight other workers’ stories. There are a lot of them that need to be told.”