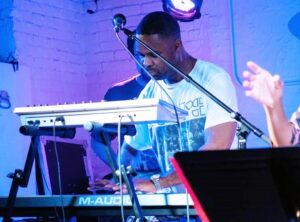 Those are only some of the myriad vocations of
Jeffery Collin Suttles. To call him enterprising would be an understatement.

A candidate for the M.A. in Urban Studies at SLU this semester, Jeffery found new inspiration for his art in a cooperative management course that he took with Rebecca Lurie in 2019. As his final project, Jeffery composed a song called, “Co-Op,” which he subsequently premiered last month at a community development rally/video shoot held at the Black Lives Matter mural in Brooklyn.

“I’ve been performing for over twenty years,” Jeffery said. “I started out in a vocal group called Mass Appeal, along with my brother and cousin. We opened up for a lot of artists, including the Notorious B.I.G. and Jay-Z. Now I’m working with another talented group of musicians called UC, which stands for Underground Collaborative, I continue to write and produce for indie artists as well as work on my solo projects.”

So how did “Co-Op” come about? “It started with an idea from my co-op class. Ironically, I worked at Green Worker Co-op as an intern a few years ago, and I was interested in learning more about the cooperative concept. The class was an extension of my initial interest in connecting people to build companies. So I wrote a song about how cooperative businesses and opportunities can open people up. The narrative starts with a rap by Berklee College of
Music professor Raydar Ellis, explaining what’s going on in urban neighborhoods, and what it will take to make our dreams come true. It’s a fun song about community enlightenment, with a funky groove.”

“The rally was a really cool event. Green Worker Co-op, the Black Panthers, and NYC Network for Worker Cooperatives, all showed up to support the movement. We shot various scenes that I want to turn into a music video/PSA to educate people about the cooperative business model. That’s my main message nowadays: sustainability, community growth, and creating a level playing field. I want to share a message of empowerment through the people.”

Music isn’t the only way Jeffery is getting his message across. “I have a degree from the Graduate Center in digital humanities. My capstone was a digital project entitled “Black Economic Empowerment: Educating in the ‘Hood.” I also have a publishing certificate from the City College of New York, where I got my undergraduate degree. Now I work with several forms of multimedia on content which relate to my passion to address issues in social and environmental justice. Oh, and then there’s my day job. I’m a special education teacher, and I just finished my first children’s book, Iggy Likes Sunday.”

Besides being the inspiration for “Co-Op,” how has his time at SLU informed Jeffery’s artistic ambitions? “Being at SLU has helped me develop a whole new theme for my art. Urban studies has really made me grow in my understanding of communities and the labor movement. A lot of my classmates already work for the city or in government agencies, and learning from them as well as my professors has taken me to a whole new level. I want to incorporate empathy in urban studies, and what it takes to make communities work with some of the technical knowledge I learned in digital humanities. And of course, with my music. I really believe some amazing things are going to happen.”

Learn more about Jeffery in On the Scene NY.